Last month when I was posting photos of peonies from my garden on Instagram, people started asking me questions about growing peonies.  So I thought I’d put a post together about what I’ve experienced in my 8 years of growing them.

Peonies do well in cooler climates– growing zones 2-8. Click here to find out which USDA Plant Hardiness Zone you live in if you don’t already know. Central Indiana, where I live, is in zones 5

Peonies love full sun. Mine are planted on the south side of our house, where they receive sun from morning to evening. But if you live in a warmer climate you may want to plant them in partial shade.

Plant peony tubers no deeper than 2 inches. If peonies are planted too deep, they won’t bloom.

If you purchase peonies from a nursery, you can plant them in the spring or fall. Although I recommend planting in the fall.

Plant roots divided from a mature peony in the fall.  If you need to transplant a peony bush, you should do it in the fall.  And plant peonies 2-3 feet apart.

Here’s a good article on how to divide and propagate peonies.

GROWTH THROUGH THE YEARS

Peonies take a few years to get established, but there are a couple ways to encourage growth.

As you can see, the blooms will start to droop due to the weight of the flowers. To keep peony plants from drooping, you can use these or these. Just put them over your peony plants as they start to sprout out of the ground. The peony stems will grow into them and be supported. 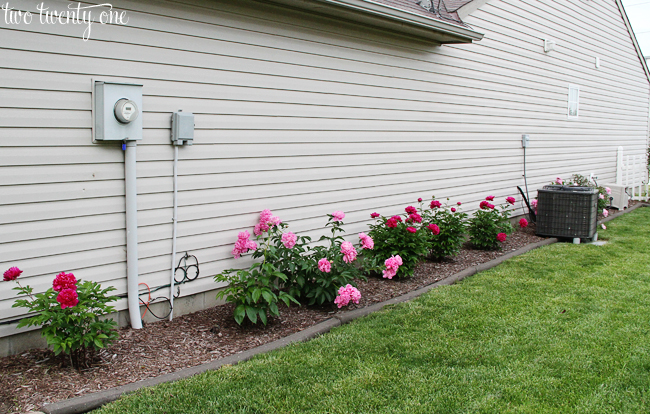 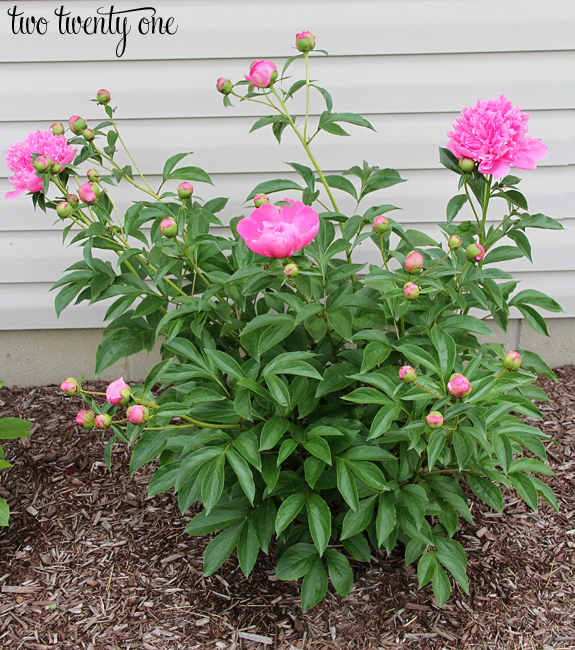 WHEN TO EXPECT BLOOMS

I have two peony bushes I purchased from a nursery and five bushes that were divided and replanted from mature peony bushes.

Also, keep in mind that the blooming period for peonies is very short and they only bloom once.

I planted the two nursery-purchased peonies in the spring of 2010.  These two bushes didn’t bloom until the spring of 2013.  It took them three years to produce any blooms.  It was disappointing to not see blooms for 3 years, but that’s typical with new peonies.

Below is a photo of one of the nursery-purchased peonies.  You can see it had a good amount of flowers for the first year it produced blooms.

I’ve had much more success with the peonies that were divided from mature plants.  I would plant the divided peonies in the fall, and they would produce at least a few blooms the following spring.

Let’s talk about ants because I’ve received a lot of questions about them.  Ants are attracted to the nectar peony buds produce.  If you check out your peony buds early on, you’ll see the shiny, sticky nectar on them.  I’ve read contradicting things about ants.  Some people say they’re beneficial to peonies and help them open, some people say ants don’t make a difference.  Either way, the ants aren’t harming the peonies so there’s no need to spray them with chemicals to kill the ants.  Let nature take its course.

If there are still ants on the blooms before I bring them inside, I gently shake the blooms (holding them at the base of the bloom). If that doesn’t work, I run the bloom under water from the outside hose or fill the kitchen sink and dunk the blooms in the water so the ants float off.  Then I send the ants down the drain with the water. And sometimes I’ll pick the ants off with my fingers.

When the peonies wilt, I deadhead them. Deadheading is when you cut off a bloom that has run its course. By cutting it off, you encourage the other blooms on that stem to open because the plant is no longer trying to support the wilting flower. Deadheading isn’t necessary, but it promotes root growth.

After the first frost in the fall, I cut the peonies down to 3-4 inches above the ground and throw away the dead plants. That’s it.

I don’t use plant food of any kind on the peonies.