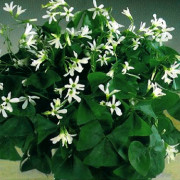 History of Shamrock, Leprechaun, and the Blarney’s Stone

Welcome to the tidbits page of Patty’s day. Here you will find interesting notes on Shamrock, Blarney’s Stone, and of course, the Leprechaun. Happy Patty’s Day!

In written English, the first reference to the Shamrock dates from 1571, andin written Irish, as seamrog, from 1707. As a badge to be worn on the lapel on the Saint’s feast day, it is referred to for the first time as late as 1681. The
Shamrock was used as an emblem by the Irish Volunteers in the era of Grattan’s Parliament in the 1770’s, before ’98 and The Act of Union. So rebellious did the wearing of the Shamrock eventually appear, that in Queen
Victoria’s time Irish regiments were forbidden to display it. At that time it became the custom for civilians to wear a little paper cross colored red and green.

As a symbol of Ireland it has long been integrated into the symbol of the United Kingdom, along with the Rose, the Thistle and the Leek of England, Scotland and Wales. So today, on St. Patrick’s Day, a member of the British Royal Family presents Shamrock to the Irish Guards regiment of the British Army.

THE MAGIC SHAMROCK
Three is Ireland’s magic number. Hence the Shamrock. Crone, Mother and Virgin. Love, Valour and Wit.. Faith, Hope and Charity. Father, Son and Holy Spirit.  Numbers played an important role in Celtic symbolism. Three was the most sacred and magical number. It multiplies to nine, which is sacred to Brigit. Three may have signified totality: past, present and future OR behind, before and here OR sky, earth and underworld.  Everything good in Ireland comes in threes. The rhythm of story telling in the Irish tradition is based on threefold repetition. This achieves both intensification and exaggeration. Even today in quality pub talk, a raconteur can rarely resist a third adjective, especially if it means stretching a point. “Three accomplishments well regarded in Ireland: a clever verse, music on the harp, the art of shaving faces.”

The Leprechaun is an Irish fairy. He looks like a small, old man (about 2 feet tall), often dressed like a shoemaker, with a cocked hat and a leather apron. According to legend, leprechauns are aloof and unfriendly, live alone, and pass the time making shoes. They also possess a hidden pot of gold.  Treasure hunters can often track down a leprechaun by the sound of his shoemaker’s hammer. If caught, he can be forced (with the threat of bodily violence) to reveal the whereabouts of his treasure, but the captor must keep their eyes on him every second. If the captor’s eyes leave the leprechaun (and he often tricks them into looking away), he vanishes and all hopes of finding the treasure are lost.

Near a misty stream in Ireland in the hollow of a tree
Live mystical, magical leprechauns
who are clever as can be
With their pointed ears, and turned up toes and little coats of green
The leprechauns busily make their shoes and try hard not to be seen.
Only those who really believe have seen these little elves
And if we are all believers
We can surely see for ourselves.
(Irish Blessing)

The Blarney Stone is a stone set in the wall of the Blarney Castle tower in the Irish village of Blarney. Kissing the stone is supposed to bring the kisser the gift of persuasive eloquence (blarney). The castle was built in 1446 by Cormac Laidhiv McCarthy (Lord of Muskerry) — its walls are 18 feet thick (necessary to thwart attacks by Cromwellians and William III’s troops). Thousands of tourists a year still visit the castle.  The origins of the Blarney Stone’s magical properties aren’t clear, but one legend says that an old woman cast a spell on the stone to reward a king who had saved her from drowning. Kissing the stone while under the spell gave the king the ability to speak sweetly and convincingly.  It’s tough to reach the stone — it’s between the main castle wall and the parapet. Kissers have to stretch to their back and bend backward (and downward), holding iron bars for support. 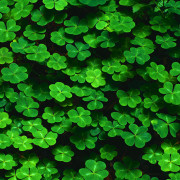